Looking for human colorectal cancer samples for use in your research? Contact us for a consultation.

Colorectal cancer is the third most commonly diagnosed cancer and the third leading cause of cancer death according to the American Cancer Society (2014). The American Cancer Society (2014) predicted about 136,830 people to be diagnosed with colorectal cancer in the US and 50,310 people to die from the disease. Colorectal cancer incidence and mortality rates are highest in African American men and women, with incidence rates about 25% higher and mortality rates about 50% higher than those in whites (Ibid.). Colorectal cancer develops in the colon or the rectum, also known as the large intestine. Depending on where they originate these cancers are referred to as colon or rectal cancer and have many features in common. In the past decade, the large decline in incidence and death rate is attributed to increased colonoscopy screening, detection and removal of precancerous polyps. Screening is recommended for people aged 50 or older as well as people with a family history of CRC. The factors that decrease risk are: Physical activity, dairy consumption, fruit consumption, vegetable consumption and total dietary fiber (10 g/day) American Cancer Society (2010).

Colonoscopy image of a cancer.

Other types of colorectal cancers:

From: Cancer Treatment Centers of America (2013).

Cologuard: August 11, 2014 the FDA approved Cologuard which is the first stool-based non-invasive DNA screening test for colorectal cancer that detects the presence of red blood cells and DNA mutations which may indicate the presence of certain kinds of abnormal growths which may be precursors to cancer or cancers like colon cancer (Johnson et al. 2014).

ColoVantage® (methylated Septin 9): Several epigenetic modifications can be valuable biomarkers for CRC diagnosis, progression, prognosis, metastasis, and response to treatment (Coppedè et al 2014). This blood-based PCR test with a specificity of almost 90% is used to detect circulating methylated DNA from the SEPT9 gene and is offered by a commercial diagnostic company. A patient with a positive test result may be at increased risk for colorectal cancer.

Therascreen KRAS RGQ PCR test: In July 2012, the FDA approved this genetic test to determine the patients whose tumors would respond to Cetuximab. It detects the presence of specific KRAS mutations in tumor tissue of patients with CRC. Patients with these mutations do not benefit from treatment with epidermal growth factor receptor (EGFR) targeted monoclonal antibodies. Evidence supports that CRC patients without KRAS mutations may benefit from anti-EGFR therapies and prolog overall progression free survival in patients (Rosty et al., 2013).

Aflibercept (Zaltrap): In August 2012, the US Food and Drug Administration (FDA) approved ziv-aflibercept (Zaltrap; Sanofi-Aventis) for use in combination with a FOLFIRI chemotherapy regimen to treat adults with metastatic CRC (Lederman, 2013).

Coppedè et al. (2014) published the most recent findings concerning genetic and epigenetic biomarkers of colorectal cancer that provide an overview of the currently available diagnostic of CRC as summarized below.

Microsatellite Instability (MSI): MSI refers to a clonal change in the number of repeated DNA nucleotide units in microsatellites and appears in tumors with four inactivated mismatch repair (MMR) genes MSH2, MLH1,MSH6 and PMS2 associated with HNPCC . Most MSI tumors occur sporadically and can be detected using five loci of the APC gene namely BAT25, BAT26, D2S123, D5S346, and D17S2720. Tumors that are MSI positive are associated with a better prognosis. Patients with MSI positive tumors have a better prognosis and a survival advantage over patients with non- MSI tumors the latter being associated with resistance to 5- fluorouracil chemotherapy and shorter survival after treatment (Sargant et. at, 2010; Sinicrope et al 2011). 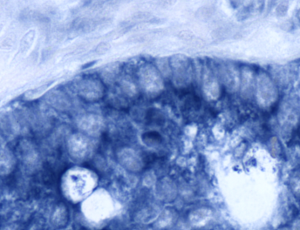 Colon cancer tissue, photographed at 40X. This sample is positive for miR-21 (indicated in blue).

Clinicopathological and Prognostic Biomarkers of CRC

KRAS point mutations (90%) occur in the earliest stages of CRC and are an established biomarker in clinical practice. The KRAS encodes a 21-kD protein (p21ras) involved in modulating cellular proliferation and differentiation. These are point mutations that are mainly detected in codons 12 (82%-87%) and 13 (13%-18%) and less frequently in codons 61, 63 and 146 (Coppedè et al., 2014).

BRAF (V-raf murine sarcoma viral oncogenes homolog B1) is a member of the RAF gene family; it encodes a serine-threonine protein kinase. 80 % of the BRAF mutations in CRC are found in the hot spot at position 600 whereby valine is converted to glutamic acid (V600E). A recent study showed a prognostic significance of reduced survival in men diagnosed with CRC, with the V600E BRAF mutation (Wangefjord et al 2013).

Phosphatidylinositide-3-kinases (PI3K) are lipid kinases that promote various biological processes including cellular proliferation and survival. Liao et al (2012) correlated the co-existence of PIK3CA exon 9 and 20 mutations in CRC patients with poor prognosis. Mutations in PIK3CA associated with specific clinic-pathological features and molecular events have been reported in 10-20% of CRC diagnosed patients. Mutations in the p110α catalytic subunit of the PIK3CA gene have been identified in several CRC cases (Rosty et al, 2013).

Patients with stage III CRC tumors with a high expression of wild type TP53 were associated with significantly better prognosis after chemotherapy along with disease free survival (Huh et al, 2013). TP53 is a tumor suppressor gene encoding a protein involved in the regulation of cell division, growth arrest and apoptosis.

SMAD activity loss occurs in 10% of the colorectal cancers and has been shown to be a significant prognostic factor for reduced overall survival in patients with advanced stage III CRC disease (Coppedè et al., 2014).

Traditionally, surgical resections are often performed for stage I and II cancers, so early stage colorectal cancer samples are likely to be available as FFPE blocks. If you are searching for samples collected prior to treatment, please note that recent trends have moved towards treatment prior to surgery. Biopsies for stage III and IV may be available but are hard to obtain because they are often used by the clinic and may not ever reach the clinic’s repository. Blood products may be available on a prospective basis. Because colorectal cancer samples can be significant in size, this indication is a good research choice if your study requires significant volume of tumor tissue sample. 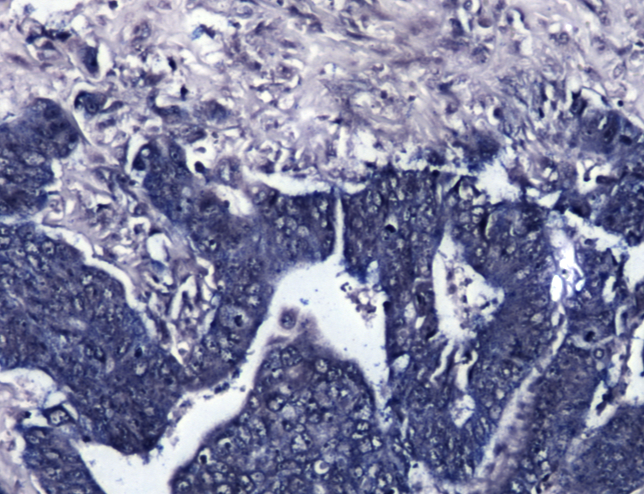 Colon cancer sample at 10X. Specimen is positive for miR-566.

For colorectal cancer samples collected prospectively, plan ahead as collection times can exceed several months depending on your inclusion and exclusion criteria. Biomarker information is only available if it was collected as part of standard care at the time of treatment. Data mining fees may apply if you require specific biomarker criteria. Remember that many biorepositories and biobanks contain primarily FFPE colorectal samples that have been CAP graduated, which means that they are at least ten years old, and data associated with the samples will reflect standard care as it was a decade or more ago.

Biomarker screening of samples is possible, but this is unlikely to be cost effective for most researchers. If you require samples with certain markers, remember that you will have to pay for testing of the ones that are negative too. A better alternative may be to purchase sections only for a statistically suitable number of cases, screen them in your own lab using your preferred assay or third party, high volume genetic screening service, then request the blocks of interest.

American Cancer Society. (2010). What are the risk factors of colorectal cancer? Retrieved from ACS: HTTP://www.cancer.org/cancer/colonandrectumcancer/detailedguide/colorectal-cancer-risk-factors

Lederman, L. (2013). “Zaltrap: A new option for the treatment of patients with metastatic colorectal cancer after an oxaliplatin-containing regimen.” American Health and Drug Benefits. Retrieved from: http://www.ahdbonline.com/issues/2013/april-2013-vol-6-no-3-payers-guide-to-new-fda-approvals/1394-article-1394