The founders of ResearchSpace met at Edinburgh in 2003 – 2005. Initially, Dr. Nigel Goddard spearheaded the Catalyzer and eCAT scientific data management projects out of his lab at the Edinburgh University. As the project grew, experienced business leader Rory Macneil joined the team and the project was spun out from the university to  become the Electronic Lab Notebook (ELN) company known as Axiope, which later became ResearchSpace.  In 2013, Rob Day, CEO of Lab-Ally LLC and experienced ELN specialist, joined the team as a US representative. By 2015, ResearchSpace had grown to eight employees at its UK location and several more in the US.

The company headquarters is still in Edinburgh, Scotland, close to Edinburgh University where it was envisioned, the US office is located in central Ohio.  By 2010, eCAT was well established with a loyal following of customers spread across  the US, Canada, the UK, Germany and elsewhere in Europe, Australia, New Zealand and Singapore. In 2012, the decision was made to modernize and improve the Lab Notebook functionality of eCAT, and work began on a powerful new Lab Notebook product called RSpace ELN. RSpace features modern HTML5 technologies, and is available as both a free cloud-based version (RSpace Community) and as the powerful on-site version (RSpace Enterprise), both of which can scale to allow centralized data management for labs, departments, or entire universities and companies. RSpace was designed with significant input from scientists, industry specialists and the University of Wisconsin’s world-renowned technology transfer team. RSpace emphasizes scaleability and connectivity with commercial data tools, institutional filestores, archiving systems and SSO technologies.  Meanwhile, the innovative sample and inventory management system developed for eCAT has been maintained as a separate system that can be used as a standalone product, or integrated seamlessly with the RSpace ELN. Both products emphasize ease of deployment, data security, distributed hierarchic administration, cross platform compatibility and intuitive usability on both workstations and mobile devices.

ResearchSpace’s vision is to provide a collaboration and communication platform to scientists and academic institutions, enabling them to accomplish their core research mission in a more efficient, productive and secure way. 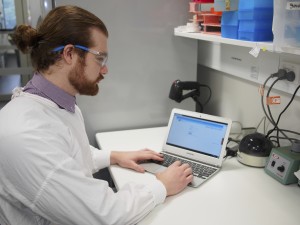 The first step in realizing that vision is their RSpace ELN, a tool that lets you manage experimental data and samples in an integrated online environment. The RSpace ELN by ResearchSpace is a third generation Electronic Lab Notebook tool, based on modern standards and simple but effective HTML 5 browser technologies. RSpace gives scientists the collaborative power and ease of use of Google Docs and wikis plus the benefits that come with the structure of a modern database: fine tuned sharing and more precise search. The product also includes an institution-wide messaging and notifications system that allows lab members to communicate, coordinate and collaborate like never before, all without having to leave the RSpace environment. With a full audit trail and electronic signatures, RSpace ELN is fully capable of supporting patentable research that is subject to regulations like 21 CFR part 11.

For more information, or to schedule a demo, please contact us.