Looking for human stomach cancer samples for use in research? Contact us for a consultation.

Stomach cancer, also called gastric cancer (GC), is the 15th most common cancer in the United States. According to the SEER fact sheet, the estimated number of new stomach cancer cases for 2015 was 24,590—which was also expected to be 1.5% of all new cancer cases—and the estimated number of deaths from stomach cancer for 2015 was 10,720, or about 1.8% of all cancer deaths (National Cancer Institute, 2015b). Additionally, it was estimated in 2012 that in the United States there were nearly 77,000 people living with the disease. The prevalence worldwide, however, is much higher, for which it is estimated to be the fourth leading cause of cancer and the second-leading cause of cancer deaths. In 2012 alone, 952,000 new cases were diagnosed throughout the world (Gastric Cancer Foundation, 2015; Torre et al., 2015; World Cancer Research Fund International, 2015).

Stomach cancer also has a high mortality rate, largely owing to the fact that it is often not diagnosed until it is in a later stage. In the US, while the numbers of both new cases and deaths from GC have been falling over the last few decades, death rates did not change significantly over the years 2002-2012 (National Cancer Institute, 2015b). The five-year relative survival rate, though, has increased to approximately 29.3% currently from 14.3% in 1975 (Ibid.).

Causes and risk factors for developing stomach cancer include:

From: National Cancer Society (2015a)

For a more detailed list of genetic/inherited and other risk factors, see “What are the risk factors for stomach cancer?” at http://www.cancer.org/cancer/stomachcancer/detailedguide/stomach-cancer-risk-factors. 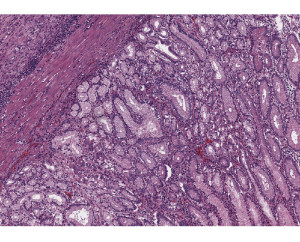 Sample from an esopho-gastrectomy, of mucinous adenocarcinoma, gastroesophageal junction.

The stages of stomach cancer are determined by combining information from TNM staging into Stages I-IV and further subdivided based on where exactly the cancer has spread to.

From: National Cancer Society (2015a)
Back to Top

Gastric cancer is incredibly complex and heterogeneous, and the detailed mechanisms of the genetic changes that lead to its development remain uncertain, although it is clear that gastric carcinogenesis is a multistep process that involves different genetic and epigenetic changes in many different genes as well as an individual’s genetic background and environmental factors. However, most gastric adenocarcinomas are characterized by genetic instability, either microsatellite instability (MSI) or chromosomal instability (CIN), both of which play a large part in gastric carcinogenesis.

The most common type of genomic instability in solid tumors is chromosomal instability. It is characterized by gain or loss of whole chromosomes (aneuploidy) and/or fractions of chromosomes (loss of heterozygosity (LOH), amplifications, and translocations), all of which alterations can affect the expression of tumor suppressor genes, oncogenes, and other genes such as DNA repair genes. CIN is the most common feature detected in sporadic gastric cancers, and it has been reported in as much as 84% of gastrointestinal tumors (Hudler, 2012). While the genetic mechanisms leading to CIN are still largely unknown, at least three potential mechanisms have been proposed: aberrant expression, mutations and/or polymorphisms in mitotic genes (implicated in chromosome segregation), or the activity of carcinogens in individuals with susceptible genetic backgrounds. Chromosome instability can also arise from H. pylori infection (Hudler, 2012).

Microsatellite instability is a change that occurs in the DNA of cells so that the number of repeats of microsatellites in DNA is different from the original number as found in the parent cell. It is caused by defective repair of DNA replication by mismatch repair genes. Because mismatch repair genes proofread DNA and repair replication errors, inactivation or deficiency of one or more of those genes causes MSI and often leads to frameshift mutations that often cause the loss of a large portion of a protein (Hamilton & Meltzer, 2006). Inactivation of mismatch repair genes in gastric cancer is primarily associated with epigenetic inactivation (CpG island methylator pathway, CIMP). Studies indicate that MSI is characteristic for some hereditary gastric cancers and is also found in 25% to 50% of sporadic gastric cancers (Hudler, 2012). MSI is associated with antral tumor location, intestinal type GCs, and a better prognosis.

In a field-synopsis and meta-analysis conducted in January of 2015 (Mocellin, et al.,), 11 gene variants were found both 1) to be significantly associated with disease risk and 2) to have a high level of summary evidence supporting their involvement in GC. Thus they are high-quality biomarkers of susceptibility to GC, and are listed in the table below.

Primarily because of late onset of clinical symptoms, gastric cancer is often diagnosed at a late stage. There are, however, several tests, scans, and procedures that can be involved in its diagnosis:

Surgery, chemotherapy, targeted therapy, and radiation therapy are all used against stomach cancer. 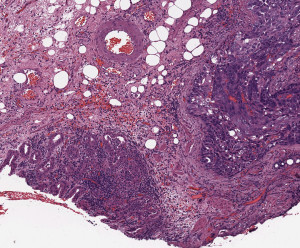 Treatment based on stage:

From: National Cancer Society (2015a)

From National Cancer Society (2015a)

Drugs that are currently being studied for the effects on stomach cancer include several that block the HER2 protein: lapatinib (Tykerb®), pertuzumab (Perjeta®), and trastuzumab emtansine (Kadcyla®); a drug that blocks the protein EGFR (which is highly expressed in gastric cancer patients): Panitumumab (Vectibix®); and a variety of other targeted drugs, ones that target different parts of cancer cells, such as sorafenib (Nexavar®) and apatinib (National Cancer Society 2015a).

About 9% of gastric cancers test positive for Epstein-Barr virus (EBV), in which cancers the PD-L1/2 ligand is found to be overexpressed (Bass, et al., 2014). Pembrolizumab is a monoclonal antibody that blocks the interaction between the PD-1 receptor on T-cells and its ligands PD-L1 and PD-L2 expressed on cancer cells that trigger apoptosis of the T-cells upon binding and thus enable the cancer cells to evade the immune system (Matsueda & Graham, 2014; Morano, et al., 2015). In a phase 1B study, anti-tumor activity of Pembrolizumab was observed (Muro, et al., 2014). Other drugs that target this interaction are also being investigated.

Because the primary treatment for most stages of stomach cancer is surgical resection, stomach cancer samples are likely to be available for stages 0-3, whereas stage 4 stomach cancer samples are less likely to be available because palliative therapies other than palliative surgery make up the primary treatment at that stage. Blood samples may be available as they can be involved in the diagnosis of stomach cancer. Keep in mind, however, that scientists need to be realistic about requesting volumes greater than 1 ml, custom collection protocols, or anything else that deviates from standard care. The more your collection requirements deviate from standard care, the harder the request will be to fill.

For stomach cancer samples or gastric cancer samples collected prospectively, plan ahead as collection times can exceed several months depending on your inclusion and exclusion criteria. Biomarker information is only available if it was collected as part of standard care at the time of treatment. Data mining fees may apply if you require knowledge of specific biomarker criteria that were tested for as part of standard care. Remember that many biorepositories and biobanks contain primarily FFPE samples that have been CAP graduated, which means that elapsed time since the collection procedure often exceeds ten years, and data associated with the samples will reflect standard care as it was a decade ago. Biomarker screening of samples by us is possible, but this is unlikely to be cost effective unless you want to purchase all tested specimens regardless of their biomarker profile. If you only want samples with certain markers, you will have to pay for testing of the ones that are negative too. A better alternative may be to purchase sections only for a statistically suitable number of cases, screen them in your own lab using your preferred assay or a third-party, high volume genetic screening service, then request the blocks of interest.