Looking for human lung cancer samples for use in research? Contact us for a consultation.

Lung cancer is the most common cancer worldwide and accounts for 1.37 million deaths annually. It is also the leading cause of cancer related mortality in the United States. In 2014 the American Cancer Society estimates 224,210 new cases of lung cancer and an estimated 159,260 deaths, accounting for 27% of all cancer fatalities among both men and women. It mainly occurs in elderly people 60 years of age or older (see  http://www.cancer.org/cancer/lungcancer-non-smallcell/detailedguide/non-small-cell-lung-cancer-key-statistics ) (See: Table 1).

Non-small cell lung cancer (NSCLC) = 85% to 90% of lung cancers. There are 3 main subtypes of NSCLC that differ in size, shape, and chemical make-up. Subtypes are often grouped together based on similar approaches to treatment and prognosis.

Other types of lung cancer namely Lung carcinoid tumors: account for fewer than 5% of lung tumors. Most of these tumors grow slowly and rarely spread.

Staging lung cancer is based on whether the cancer is local or has spread from the lungs to the lymph nodes or other organs. Because the lungs are large, tumors can grow in them for a long time before they are found.  Most people with lung cancer are diagnosed at stages III and IV. (See: Table 2)

Stage I: The cancer is located only in the lungs and has not spread to any lymph nodes.

Stage II: The cancer is in the lung and nearby lymph nodes.

Stage III: Cancer is found in the lung and in the lymph nodes in the middle of the chest, also described as locally advanced disease. Stage III has two subtypes:

Stage IV: This is the most advanced stage of lung cancer, and is also described as advanced disease. This is when the cancer has spread to both lungs, to fluid in the area around the lungs, or to another part of the body, such as the liver or other organs.

Subsets of NSCLC can be further defined at the molecular level by recurrent ‘driver’ mutations that occur in multiple oncogenes, including AKT1, ALK, BRAF, EGFR, HER2, KRAS, MEK1, MET, NRAS, PIK3CA, RET, and ROS1 (See: Table 3).
Epidermal growth factor receptor (EGFR) gene mutations frequent in adenocarcinoma of the lung in nonsmokers and are implicated in the development of such lesions (http://standardofcare.com/Lung_Cancer)

K-RAS gene mutations have been found in 20–30% of non-small cell lung cancer and also occur most commonly in adenocarcinoma. A meta-analysis based on previously published literature performed by Meng and co-workers (2013) suggested that K-RAS mutations are found in both former/current smokers and non-smokers, but are rarer in the latter and are associated with a worse overall survival, especially in patients with adenocarcinoma and early stage. These mutations which are less common in East Asian vs. US/European patients (Riely et al. 2008; Sun et al. 2010) are missense mutations, which introduce an amino acid substitution at position 12, 13, or 61 resulting in constitutive activation of KRAS signaling pathways thereby defining a distinct molecular subset of the disease. Currently, there are no direct anti-KRAS therapies available.

Table 3 : Frequency of mutations and availability of targeted therapies in NSCLC

Note : One NSCLC case report with each of these mutations also responded to Crizotinib (Ou et al. 2011) the latter being a partial response (Bergethon et al. 2012) 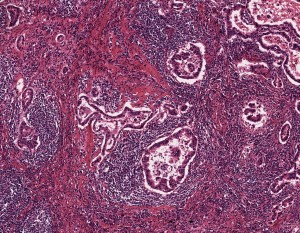 The discovery of certain proteins or biomarkers gives oncologists the option of performing tests to determine if one of these biomarkers is present in the tumors thereby helping them to decide which treatment options will work the best. These individualized treatments may help patients avoid treatments that are unlikely to work and help to decrease the side effects of treatment. These markers are found on the cell surface or in the genes that program cells. Some biomarkers include: Epidermal growth factor receptor (EGFR), Anaplastic lymphoma kinase (ALK) and K-ras mutations (KRAS 1). Chemotherapy drugs are used to attack specific targets in cancer cells by attaching to or blocking these targets. People with advanced lung cancer with certain molecular biomarkers could receive treatment with a single targeted drug alone or in combination with chemotherapy. The treatments for lung cancer include:

Despite caveats, ‘driver’ mutations that may be linked to outcomes with targeted therapies in SCC are emerging. Altered genes include FGFR1 and DDR2 as well as PIK3CA. In addition, results from a recent large genomic study in lung SCC have added a variety of potential therapeutic targets that await validation in prospective clinical trials (Hammerman et al. 2012).

At ASCO 2013 Fabrice Barlesi, MD, PhD, of Aix-Marseille University described a French biomarkers study on the feasibility of NSCLC Tumor Profiling and Biomarker-Guided Therapy.  KRAS mutations were found to be most common in smokers (31.7%) whereas EGFR activating mutation was seen most often in never-smokers (33.2%). The project so far includes six markers: EGFR, KRAS, ALK, BRAF, HER2, and PI3K.

Targeted NSCLC treatment using screening for EGFR mutation, which is often linked to Genentech’s/Astellas’s Tarceva’s SATURN (Sequential Tarceva in Unresectable Non-Small Lung Cancer) has been found effective in a maintenance trial in patients with advanced, inoperable, metastatic NSCLC treated with first-line platinum based doublet-responders treated with erlotinib or placebo: greatest benefit in patients with EGFR mutation positive group with a 90% reduction in the risk of disease progression compared to placebo, but only 11% had such a mutation.

Surgical resections are often performed for stage I and II lung cancers, so early stage lung cancer samples are likely to be available as FFPE blocks. Biopsies for stage III and IV may be available but are hard to obtain because they are often used by the clinic and may not ever reach the clinic’s repository. The prevalence of the disease and the frequency of blood draws from cancer patients make it relatively easy to obtain FFPE NSCLC samples, blood derived NSCLC samples like plasma and serum, or even “matched pairs” of tumor tissue and biofluids from the same donor, tissue but scientists need to be realistic about requesting volumes greater than 1 ml, custom collection protocols, or anything else that deviates from standard care. The more your collection requirements deviate from standard care, and the the harder the request will be to fill. 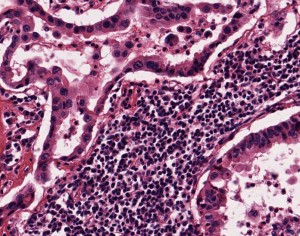 For NSCLC samples or SCLC samples collected prospectively, plan ahead as collection times can exceed several months depending on your inclusion and exclusion criteria. Biomarker information is only available if it was collected as part of standard care at the time of treatment. Data mining fees may apply if you require knowledge of specific biomarker criteria that were tested for as part of standard care. Remember that many biorepositories and biobanks contain primarily FFPE samples that have been CAP graduated, which means that elapsed time since the collection procedure often exceeds ten years, and data associated with the samples will reflect standard care as it was a decade ago. Biomarker screening of samples by us is possible, but this is unlikely to be cost effective as you will have to pay for testing of the ones that are negative too. A better alternative may be to purchase sections only for a statistically suitable number of cases, screen them in your own lab using your preferred assay or a third-party, high volume genetic screening service, then request the blocks of interest.