Looking for human liver cancer samples for use in research? Contact us for a consultation.

Liver cancer is the 13th most common cancer according to the SEER fact sheet (National Cancer Institute, 2015). This indication represents about 2.2% of all new cancer cases in the US. Even though relatively few individuals are diagnosed with liver cancer every year, the number of deaths is high because the five-year survival rate for liver cancer is only 17.2% (Ibid.). According to the American Cancer Society, it is estimated that in 2015 there will be over 35,000 new cases of primary liver cancer in the U.S., and that more than 24,000 people would die from the disease. Importantly, liver cancer is much more common in many other parts of the world—in some countries in sub-Saharan Africa and Southeast Asia it is the most common type of cancer, and worldwide it is one of the leading causes of cancer deaths, being responsible for more than 600,000 deaths globally every year. Additionally, the number of new liver cancer cases in the United States has been increasing at an average of 4.0% each year over the last ten years (National Cancer Institute, 2015).

For hepatocellular carcinoma (HCC), which is by far the most common type of liver cancer (see “Classification” below), risk factors include:

Hepatocellular carcinoma (HCC) – HCC is the most common type of liver cancer comprising about 80% of primary liver cancers (American Cancer Society, 2015). HCC is most often caused by cirrhosis of the liver that is itself most commonly caused by alcoholism and hepatitis C in the United States. Because it frequently does not cause symptoms in its earlier stages, it is often not diagnosed until it is in a later stage (Emory Healthcare, 2015). This is one of the factors that can make it difficult to obtain early stage liver cancer samples, but FFPE HCC tumor blocks from excisions performed at later stages of the disease should be available. There are several histological subtypes of HCC, but most of those subtypes do not affect the treatment or prognosis of the disease. It has two different growth patterns: 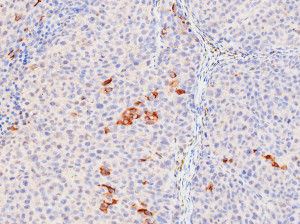 Intrahepatic cholangiocarcinoma (bile duct cancer) – This kind of cancer is responsible for about 10- 20% of primary liver cancers (American Cancer Society, 2015). It is an aggressive form, difficult to cure, that begins in the cells that line the small bile ducts within the liver. Most cholangiocarcinomas, however, actually begin in the bile ducts that lie outside the liver.

TNM staging is used for liver cancer; it describes:

Once the cancer is TNM staged it will be further classified into stages I – IV as with other cancers.

Another staging system that is used in patients who have cirrhosis is the Child-Pugh score, which is a measure of liver function. There are five factors that are assessed, and then the functionality of the liver can be placed into one of three classes: A, in which liver function is normal; B, in which liver function is mildly abnormal; and C, in which there are severe abnormalities. Patients with class C cirrhosis and liver cancer are frequently too sick to undergo surgery or other primary cancer treatments. The five factors of the Child-Pugh score are:

The first three of those factors are assessed through blood tests.

The Barcelona Clinic Liver Cancer (BCLC) Staging System is also commonly used to predict the patient’s chance of recovery and plan treatment. It is based on the following:

It is staged as:

The following table is an abridged version of “Table 2: Candidate driver genes in hepatocellular carcinoma with recurrent genetic alterations” from the review article “Exploration of liver cancer genomes” (Shibata & Aburatani, 2014):

  Other genes and mutations worth mentioning that are not described in the table include the following:

TERT is a gene involved in telomere maintenance. Mutations to the TERT promoter have been observed in as much as 60% of HCCs (Schulze, et. al. 2015). These appear early on in HCC carcinogenesis and lead to activation of telomerase expression. Telomerase activation is required for the infinite replication of cancer cells (Shibata and Aburatani, 2014).

Mutations in RPS6KA3 have been observed in 7% of HCCs. The result is activation of the RAS-MAPK pathway and increased levels of phosphorylated ERK1 and ERK2. Thus, HCCs that exhibit RPS6KA3 mutations may be targetable with ERK (or MEK) inhibitors (Schulze, et al., 2015).

Mutations in KEAP1 can activate the oxidative stress pathway, which has sometimes been found to be activated in HCCs. Schulze, et al. (2015) found that two out of three cell lines with KEAP1-inactivating mutations were highly sensitive to HSP90 inhibitors.

Mutations in MLL (also known as KMT2A), MLL3, and MLL4, have been found to recur frequently in HCCs. They are involved in epigenetic regulation (Schulze, et al., 2015, Shibata and Aburatani, 2014).

Many HCC mutations are loss-of-function mutations, which means that they cannot easily be targeted for therapy. Genes exhibiting loss-of-function mutations do not make good therapeutic targets for cancers because the restoration of lost gene activity is more difficult to achieve than blocking genes that are overactive in cancer cells (Ozen, et al., 2013). For this reason, many researchers have turned to investigating miRNA as potential therapeutic targets for HCC as several studies have revealed aberrant expression of specific miRNA in HCC cells and tissues. Because miRNA regulate the expression of different oncogenes and tumor suppressor genes (and thus play a role in regulating biological processes such as cellular differentiation, proliferation, and apoptosis), their expression is normally tightly regulated. Their aberrant expression can, then, play a role in carcinogenesis (Morishita and Masaki, 2015).

Studies have found that certain miRNAs are often down-regulated in HCC—miRNAs that may function as tumor suppressors. When the normal expression of tumor suppressive miRNAs is restored, cell cycle block, increased apoptosis, and reduced tumor angiogenesis and metastasis result. There are up- regulated miRNAs in HCC as well—onco-miRNAs that potentially target tumor suppressive genes (Khare, et al., 2013).

Liver cancer can be challenging to diagnose. Liver cancer is usually symptomless in its early stages, and liver tumors often cannot be felt from outside. There are, however, several tests that will help determine if an individual has liver cancer:

Treatment options for liver cancer include surgery to remove part of the liver, liver transplant, tumor ablation, tumor embolization, radiation therapy, targeted therapy, and chemotherapy. The therapies administered to an individual patient will depend primarily on the stage of liver cancer, health of the liver, and overall health of the patient. Instead of using TNM staging to provide direction for the course of therapy, however, physicians classify liver cancers as: potentially resectable or transplantable, unresectable, inoperable with only local disease, or advanced. Details regarding the treatment options are as follows.

Several avenues of research are underway to find new and better treatments for liver cancer. Some studies revolve around improving surgical treatment by studying adjuvant therapies (administered directly after surgery to minimize the chance of the cancer recurring) or neoadjuvant therapies (administered prior to surgery to try to shrink the tumor(s) so as to make them resectable) (American Cancer Society, 2015).

Immunotherapy, alone or in combination with other therapies, is also being studied for improvements in cancer treatment. There are several different types of immunotherapy: checkpoint inhibitors/immune modulators, therapeutic vaccines, adoptive T cell transfer, monoclonal antibodies, cytokines, and oncolytic virus therapy. Most of the drugs/agents in these therapies that are being studied are currently in phase I or II clinical trials. Checkpoint inhibitors/immune modulators, often antibodies, are designed to cause the patient’s own immune system to mount an attack on the cancer cells. Therapeutic vaccines are designed to cause the immune system to respond to tumor-associated or tumor-specific antigens. Adoptive T-cell therapy is an approach in which T-cells are removed from the patient, then treated with chemicals or genetically modified in order to enhance their activity, and then introduced back into the patient in an attempt to enhance the immune system’s anti-cancer activity. Monoclonal antibodies generated in the lab, target specific tumor antigens. Cytokines play a role in controlling the growth and activity of immune system cells. Oncolytic virus therapy causes tumor cells to self-destruct by using a virus modified to specifically infect tumor cells (Cancer Research Institute, 2014).

Because so few liver cancer patients in the United States qualify for surgical resection, liver cancer samples may be hard to come by, especially for later stage liver cancers. Samples may be available from biopsies because of their use in diagnoses.. Blood samples may also be available as they too can be involved in the diagnosis of liver cancer. Keep in mind, however, that scientists need to be realistic about requesting volumes greater than 1 ml, custom collection protocols, or anything else that deviates from standard care. The more your collection requirements deviate from standard care, the harder the request will be to fill.

For liver cancer samples collected prospectively, plan ahead as collection times can exceed several months depending on your inclusion and exclusion criteria. Biomarker information is only available if it was collected as part of standard care at the time of treatment. Data mining fees may apply if you require knowledge of specific biomarker criteria that were tested for as part of standard care. Remember that many biorepositories and biobanks contain primarily FFPE samples that have been CAP graduated, which means that elapsed time since the collection procedure often exceeds ten years, and data associated with the samples will reflect standard care as it was a decade ago. Biomarker screening of samples by us is possible, but this is unlikely to be cost effective unless you want to purchase all tested specimens regardless of their biomarker profile. If you only want samples with certain markers, you will have to pay for testing of the ones that are negative too. A better alternative may be to purchase sections only for a statistically suitable number of cases, screen them in your own lab using your preferred assay or a third-party, high volume genetic screening service, then request the blocks of interest.