Looking for human breast cancer samples for use in research? Contact us for a consultation.

Breast cancer (BC) is the number one cause of cancer-related mortality among females worldwide (Torre et al, 2015) and the second leading cause of cancer death in U.S. women, exceeded in the  U.S. only by lung cancer (American Cancer Society). Due to the prevalence of this disease, breast cancer samples for use in research are in high demand.

Globally, 25% of all cancer cases diagnosed in women are BC, with more than half of those being located in more-developed countries (Torre et al, 2015).  The American Cancer Society estimates just under 250,000 new cases of invasive breast cancer will be diagnosed in the United States in 2016. According to the National Cancer Institute’s Surveillance, Epidemiology, and End Results (SEER) program, BC accounted for an estimated 14% of all new cancer cases in the U.S. in the year 2015, and an estimated 40,290 deaths in the same year. BC mortality rates in the U.S. have declined since 1989, with greater decreases in mortality found among women under the age of 50. This decrease is primarily due to earlier detection through screening, improved treatment options and an increase in education and awareness among the affected population (American Cancer Society). 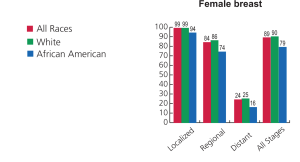 Breast cancers can be classified based on their histopathology which refers to the examination of a biopsy or surgical specimen by a pathologist, after the specimen has been processed and histological sections have been placed onto glass slides. Pathology grading systems classify the microscopic cell appearance, abnormality and deviations in their rate of growth with the goal of predicting developments at tissue level. Pathologists describe cells as well differentiated (grade I or low grade), moderately differentiated (grade II or intermediate grade), and poorly differentiated (grade III or high grade) as the cells progressively lose the features seen in normal breast cells. Poorly differentiated cancers have the worst prognosis.

There are some special types of breast cancer which are sub-types of invasive carcinoma named based on their histo-pathological features.

Classification based on stage

The TNM classification for staging breast cancer is based on the size of the cancer where it originally started in the body and the locations to which it has traveled.

Classification based on receptor status

Several genes and cell receptors are key for diagnosis, classification and treatment of breast cancer ER, PR and HER2 receptor status. Breast cancer can also be classified based on proteins on or in the cancer cells, into groups like hormone receptor-positive or triple-negative. Estrogen and progesterone hormones often fuel the growth of breast cancer cells. Breast cancers referred to as ER-positive or ER+ and/or PR-positive or PR+ have estrogen and/or progesterone. The epidermal growth factor receptor (EGFR) is the founding member of the ErbB family of four structurally related receptor tyrosine kinases. In humans this includes HER1 (EGFR, ErbB1), HER2 (Neu, ErbB2), HER3 (ErbB3), and HER4 (ErbB4). Each receptor can be either positive or negative i.e.  ER positive (ER+), ER negative (ER-), PR positive (PR+), PR negative (PR-), HER2 positive (HER2+), and HER2 negative (HER2-).

Cells negative for all of these receptors, i.e. ER-, PR- and HER2-, are called basal-like or triple negative breast cancer (TNBC).  TNBC tend to spread and grow more quickly than other types of breast cancer. TNBC is an extremely aggressive type of breast cancer which is not responsive to currently available targeted treatments like tamoxifen and or trastuzumab. Breast cancers with these characteristics tend to occur more often in younger women and in African- or Hispanic/Latino ethnicity. 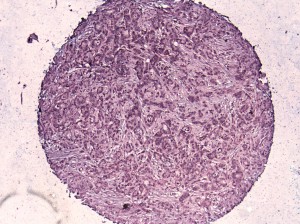 Activation of Androgen receptor (AR) is expressed in 80-90% of ER+ breast cancers and 40% of “TNBC” breast cancers. AR appears to suppress breast cancer growth in ER+ cancer while in it appears to act as growth promoter in ER- breast cancer and is being investigated as prognostic marker for treatment. (Lehman et al, 2011)

(http://ghr.nlm.nih.gov/condition/breast-cancer)
Specific DNA mutations or gene expression profiles identified in the cancer cells may guide the selection of treatment. The most prominent genetic profiles based on clinical evidence that have been developed for breast cancer are:

Parise and Caggiano (2014) recently assessed survival of patients using ER/PR/HER2 and illustrated the heterogeneity of HER2+ subtypes thereby providing a clear separation in survival and adjusted mortality. They compared the usefulness of the ER/PR/HER2 subtyping of breast cancer with an IHC surrogate classification. They found that ER/PR/HER2 subtype testing was a simple, inexpensive, easy to interpret, reliable, reproducible, and readily available for clinicians without additional tests. They also found that the heterogeneity of the HER2+ subtypes and the prognostic importance of ER and PR expression was obvious when using ER, PR, and HER2 alone. Gene expression profiling studies correlated with immuno-histochemical biomarkers (Brown et al 2004; Bauer et al 2010) and identified four categories of breast cancer, namely luminal A, luminal B, HER2 overexpressing, and basal-like or triple negative breast cancer (Sørlie et al , 2001).

Researchers have looked at different gene expression profiles and found that they can help predict if an early stage breast cancer is likely to recur after initial treatment. Several such tests, which look at different sets of genes, are now available:

Prognosis and treatment decisions are still guided by tumor stage, hormone receptor status, HER2/neu status and BRCA mutations. Targeted therapies are a group of newer drugs that specifically take advantage of gene changes in cells that cause cancer.

Traditionally, surgical resections are often performed for stage I and II cancers, so these samples are likely to be available as FFPE blocks. However, if you are searching for samples collected prior to treatment, please note that recent trends have moved towards treatment prior to surgery. Biopsies for stage III and IV may be available but are hard to obtain because they are often used by the clinic and may not ever reach a repository. Blood products may be available on a prospective basis.

For breast cancer samples collected prospectively, plan ahead as collection times can exceed several months depending on your inclusion and exclusion criteria. Biomarker information is only available if it was collected as part of standard care at the time of treatment. Data mining fees may apply if you require specific biomarker criteria. Remember that many biorepositories and biobanks contain primarily FFPE breast cancer samples that have been CAP graduated, which means that they are at least ten years old, and data associated with the samples will reflect standard care as it was a decade or more ago.

The frequency of blood draws from cancer patients makes it relatively easy to prospectively collect blood derived breast cancer samples like plasma and serum, but scientists need to be realistic about requesting volumes greater than 1 ml, custom collection protocols, or anything else that deviates from standard care. The more your collection requirements deviate from standard care, the harder the request will be to fill.

Biomarker screening of samples is possible, but this is unlikely to be cost effective unless you want to purchase all tested specimens regardless of their biomarker profile. If you only want samples with certain markers, expect that you will have to pay for testing of the ones that are negative too. A better alternative may be to purchase sections only for a suitable number of cases, screen them in your own lab using your preferred assay or third party, high volume genetic screening service, then request the blocks of interest.